My speculative fiction short story, "Sub Migratio", features in the launch issue (end April 2017). I will always be indebted to Troy and the Enkare team for their vote of confidence in my story to grace the pages of their first issue - and featuring a speculative fiction piece!

Share the love. Support Enkare Review as they begin the journey forward with African literature and African storytellers. 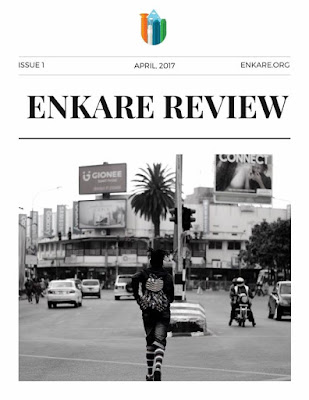 There is hope in the new generation. Josh will not be just ‘a statistic’. He will not stay alive ‘just to consume’. In this way he takes up his father’s mantra to fight against the regime and/or machines. Maybe, in his final act of death, he goes further to liberate his father from the constraints of family, to give him the steely freedom one needs to fight for a nation. In this Josh’s death or his mother’s is not in vain.

Josh’s father is a Dad, but he chooses to be a soldier first, which infuriates the uncle, who grudgingly understands his brother’s pan African heroism.

I like how the title is a sub Saharan migration, an underground migration, how it might contain a seismic migration. Literally, the story’s migration takes place underground, a flip from the usual surface migration and smuggling of people. The human spirit is unrelenting and inventive; the people find a way to use the freighters to get away. The freighters and the regime do some more tinkering to frustrate the migrants.

The alternative source of energy to power the freighters is great! And also ties into the title.

I smell a caution on how human beings create machines to do things, but this story has transgressed to machines being created by machines so this explains why they are unstoppable? It’s some form of AI, but machine induced. I thought that was interesting.

I guess I will come to understand the story more the more I think about it and go back to it.