Words and Awards—Creating Visibility in Africa 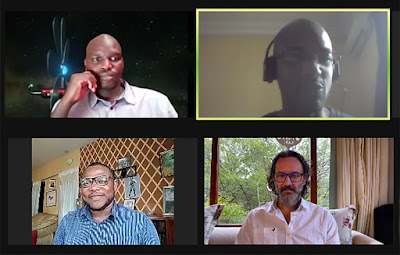 This panel decided to talk about WORDS – terms used to describe what we do – and where we feel our work fits into. Plus highlighting new writers to keep an eye on.

Mazi: Thank you. I also want to use a portion of the time to look at the writers for the commendations. I'm hoping that we will get folks out there doing the same work and get more space for this writers to publish. I am going to come to you now. What writers have you seeing now ?Mame: Besides what I'm reading it, it is the experience right now doing the editing very nice reversal of perspective because they get to talk to them about what motivates them to write and what they are trying to express. And so I get to see a process that I don't see in the cities -- stories that I'm reading. For them, it is pretty clear what it is we are trying to achieve. And there is this young author from Malian to send who is from Strasberg in France. She is going to be upcoming in not this one, but the next one. We got the story and at first we rejected it because it was a little bit all over the place in terms of the narrative. But damn, she had a voice. There was clearly something epic about the way she was writing and it is set in an alternate historical period within the Mandingo Empire in them calling her to talk about the story because I want to work with her on it to see what we can get. She picks up the phone and I'm like when a second, this girl isn't even 18 years old yet. Turns out she is 17 years old. This is one of her first forays into things and she is writing a story that looks at female characters within the empires of the time, but also the relationships based on caste systems and really tries to question some of the lesser-looked at aspects of African history. It is easy to try to address colonialism as an external evil. It is easy to try to look at transatlantic slavery. The more I've read recently on slavery as it was practiced in Senegal and some parts of the country, it looks almost an exact parallel except for some of the forms and the scale of it. But the possession of the person was there, the dehumanization, the removal of the name. NIC have a former slave caste is a class of domestic servants who still suffer from a lot of the same ostracization in society. And when it comes to Africa, we tend to like to remind people that the myth of the happy savage isn't true, but we also like to play that when it comes to our own issues and our own problems. We are very shy to say our societies were not perfect before white people came here. And trying to look at that to me was something that really spoke to me. Plus, she is 17 years old. She is talking to me about authors who I completely ignored in my curriculum because I was like, she sounds boring. She is telling me about them and I am like witty second, you actually read that person? That is what I like seeing. People who want a challenge -- to challenge some of the narratives even if it is a little painful to look at history and how it affects us today. But that is who I want to give a shout out to.Mazi: Thank you. South Africa has a longer tradition of fiction than other parts of Africa. Most of the major writers that we know are within that part of the continent. Are their young raters upcoming from the continent?Stephen: From South Africa in particular, not really that I can see. The writers that I have seen that have been published in other magazines, from my point of view, it has been very difficult to get any of my work published in South Africa. Most of my work has been published around the continent from Kenya to Nigeria. And I think that that is a major barrier in South Africa itself, is that it is very focused on literary works. There's not a lot of scope in terms of publishers for South African speculative fiction in any form. Some of us have to resort to self-publishing to get the work out or, like I say, putting it out to Omenana and what is obviously a huge beacon in Africa in terms of getting new writers out there, publishing some of us. In the last couple of years, I think the one that I'm keeping an eye on, Tlotlo Tsamaase, and Innocent Chizaram Ilo, all of us tied into the short story. Both of those authors, they've got imagination, they deal with fantasy as well as speculative. And then on the longer form, a really prolific writer. Eugen Bacon. In terms of how much she actually gets out there and just really her prose is really -- I feel intimidated when I read words that she puts on paper. The structure of the words that she uses and how she uses them. Those three. I think with all of them, with anybody that is breaking ground for themselves in short story, I always anticipate whatever they going to do with a novella or novel? And Oghenechovwe Donald Ekpeki. It would be nice for them to be able to get longer pieces published and find the time and the support to be able to actually take the time to spend a couple of years writing a novel because I think they will really be able to fly in terms of novel output.

Mazi: Thank you very much. I am always in all of people who put us first.Mame: before you do, absolutely, Eugen Bacon. She is like Stephen King and her output. And she is just phenomenal in her prose. I think that guy deserves a nickname or some sort of anagram or acronym or something. When I finish reading the stories, I can't exactly tell you what they are about. I am just left in a place of absolute like "what the hell just happened to me?" And it is not so much a reading experience or a visual experience, it is like a full sensory experience. I don't know exactly how he does it, but between the tone, the writing, the subject matter, you are completely immersed into another reality and I find that absolutely phenomenal and I don't understand how he doesn't do more work as a published author.Mazi: I just want to share a couple of writers. We got the story called "buddies" and I think she is somebody to look out for. I talked about a very, very humorous story. I don't know where he is from. He is somebody I really want to see his work again. Love the story, love the writing. I think at this moment we are in a very good place. We feel what the future is going to bring. It is not something a lot of us need to contend with because we have people who are coming out and they are actually doing the work and they are doing it well. So it is not like the early days when you get stuff and you wonder how am I going to study it? Where am I going to start from? I think it is an important time for us to use this time , so I am going to go with Stephen first.Stephen: My next novel, Bones & Runes, is coming out on the 14th of February. It is young adult, new adult, 20-something characters exploring traditional beliefs within southern Africa and isiZulu, Khoekhoegowab languages – Hindu, all sorts. The three main characters, the main character's an isangoma in training, his friend Dan is a druid in training and their friend Amira is a Hindu warrior magician. I have had a lot of fun with that and I'm glad it is coming out. I will be launching that in the U.K.Mazi: Thank you. Fast, fast, fast. Time is not on our side.Mame: I actually have a story coming out tomorrow. I don't really write that many stories, it looks more at my black experience in the West, in France and putting that into a futuristic perspective. Largely because it is part of an experience that I've had to push back to the back of my head and outside of my consciousness just to function sometimes and it is interesting how 20 years later all of this comes back and unable to talk about it. So I am interested in seeing how people are going to respond. I've got a story coming out in an anthology next year. Actually, that story was rejected one time. I wrote it like six years ago and it is really nice to find a home today. It is climate fiction sort of, more science fantasy than anything else. Mythology is blended in. Finally, Africa risen is coming out with -- Senegal and possession in the traditional spirit is coming through to deal with all of that.Mazi: Cool, thank you. You have less than a minute.Dilman: I have a second collection coming up next year. I was hoping to have two books, but the publisher decided to put it all into one thing. Some of them are reprints. I am hoping to finish a novel for young adults as well, but I didn't get around to completing it quite. So that one collection is coming out.Mazi: For me, I have a collection coming up next year, and that would be my first. It has been a long time coming. Thank you to the Panelists. Until next time. Bye-bye. I am trying to chop for time.