TL;DR: On 23 June we packed up house – 95% of our household and moved in with friends. While staying with my brother and his wife in Limpopo on 12 July, our world seemed to go up in smoke. From one emotional situation to another, we thought we'd hit rock bottom until the Universe opened another layer of the bottomless pit. But the pit was a tunnel...with light at the end of it.

On 23 June we packed up house – 95% of our household – and moved in with friends Jane and John Smith. It was hard watching all our stuff get packed away, mostly inaccessible, into one regular garage-sized space. Equally hard was figuring out what we "needed" on a daily basis with us and that could fit in a suitcase.

Having friends and family supporting us during this time made a huge difference, and those that understood what we were going through already.

My brother Michael and my sister-in-law Cecilia had said we must come up to them in Limpopo when we could and we made plans to do that once we had done the move and settled at the Smiths.

On 8 July we traveled 12 hours (circumventing Gauteng during their border lockdown), stopping apprehensively in Estcourt where Zuma had handed himself in to authorities. All was good in the cold, quiet petrol stop. We headed onward with a few stops in between and finally arrived at my brother and sister-in-law's place outside Vaalwater as the winter night was setting in. The middle of nowhere never looked better.

What we saw on social media on Monday 12 July.

Sunday we saw images from the nighttime looting and burning at our storage premises entrance, hoping our unit was far enough away to go untouched.

Monday morning Jane sent Riley a message about the night’s effects on the storage facility. She had a video. Riley asked her to send it. She warned us. We wanted to see it.

I wasn’t prepared to actually get to see near our unit and realise what it meant. Riley burst into tears and I was trembling as we hugged. I took two screenshots of the video and walked into the main house. Cecilia was in the kitchen and I asked where Michael was. He was outside the front of the house by his bakkie. He said howzit as he moved some metal beams (his deck materials) and asked how I had slept – and then what was wrong as he saw my expression. I rubbed my face in exasperation and walked up to him and hugged him for a while as I sobbed. He kept asking what was up.

I then opened my phone with shaking hands and fingers to show him the screenshots.

I eventually caught my breath.

I thought fuck it. People need to know where this is hitting some of us. It’s not just businesses and shopping malls. So I posted it to Facebook and Instagram, and for the first time let people know we were homeless, staying with friends and family:

Some of you may know Riley and I needed to pack up our household (to stay with friends and family for a while). Last night and this morning the storage facility housing 99% of our stuff (in Waterfall) was targeted by the looting hitting KZN. The circled area is where our unit is. (This is a screenshot from a video which I won’t be posting) We are in Limpopo staying with my brother, so personally we are safe. We hope everyone is staying safe. ❤️

The rest of that week was tense. We felt so detached and a million miles from our family (elderly parents) and friends back in Hillcrest and Durban where the brunt of the rioting and looting was playing out. There seemed to be no assistance from government and law enforcement. And yet, Riley and I felt extremely safe where we were and the community around us in Vaalwater – their preparedness for being cutoff from the rest of the area or world during floods and fires and the zombie apocalypse. There was also something reassuring about being with big brother and his military training.

Social media posts said everything was lost, nothing survived. And that is what we dealt with. We tried not to watch too many videos.

We would lie awake in the middle of the night while random objects from our day to day lives in our house would pop into our minds. Fuck, that's gone. An emotional ride of the precious and the mundane objects that made us tear up.

By the end of the week we began getting daily updates from the very efficient staff at the storage facility. But updates soon became frustrating as we were told our unit was among those inaccessible due to danger of collapse from the fire damage.

We had to sit on our hands while others rushed in to retrieve their belongings, move them out to safety, post on social media and WhatsApp groups about things they found and the scenes they witnessed – is this anyones? We tried to catch glimpses of anything that may be ours – anything remaining?

We eventually travelled back to be around in person and handle anything that needed handling. Still we waited. More people posted about the facility. Those allowed in.

Then we said fuck it and decided to go and see for ourselves no matter what.

How we found it on Thursday 5 August.

Thursday 5 August we decided to go to the facility. Driving slowly up Brakenhill Road was eery. A war zone. We went through the makeshift security gate (the electric gate system was nonexistent). Signed in.

Walking through the detritus and the mayhem was emotional. We got to our unit and began rummaging through the actual ash. Coins. Broken crockery. Trying to discern things from our lives now rendered abstract. A gut punch when you realise what a little thing was part of. After two weeks of letting go it was hard realising the things we had lost, that we hadn't even thought of. Stupid things. Insignificant things. Significant at some point in time.

We were finally told we were allowed to open up and remove everything. The complex was going to be demolished. They angled-grinded the still secure padlock (not even the fire extinguisher alongside could smash the padlock like they do in the movies).

Compared with 065 and 067, our unit was almost untouched by human hands. From being told all was lost to a glimmer of hope. It was a rollercoaster of emotions every day not knowing and hearing tidbits from others and social media. But the fire...

Then I climbed inside…

Inside was on another level. The unit was 3 metres high, with the top layer of "light" furniture and loose items exposed to what was evidently a raging roof blaze. Everything one metre deep was charred and covered in ash. Everything below that was covered in a thick greasy soot.

I kept my mask on the entire time, fully aware of the crap I was going to be breathing in.

I climbed to the top of the two metre high stacked items to survey the room, pulled out my pocket torch and looked on. 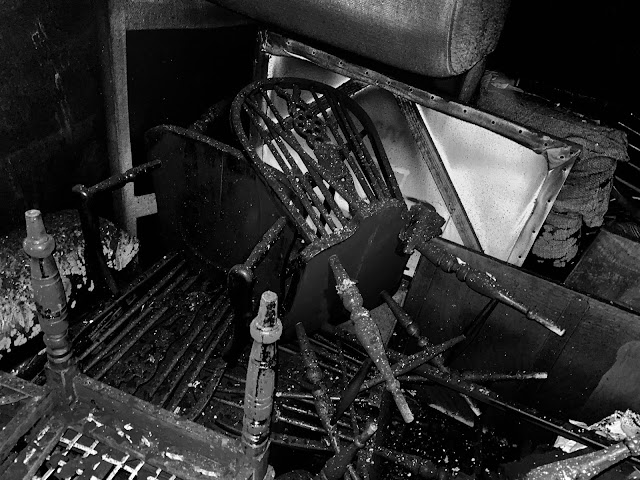 A soft breeze wafted black flakes and ash around me. 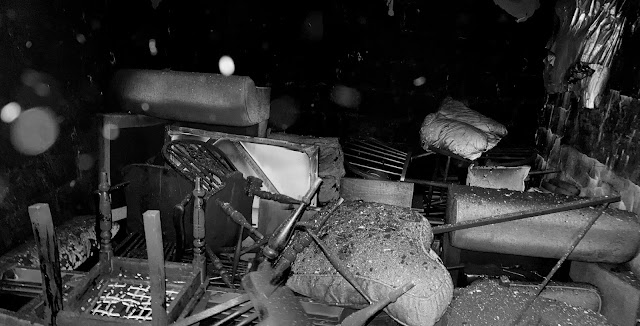 I balanced on one leg and awkwardly took photos while calling back to Riley, pacing up and down outside while picking at random bits on the ash piles, through muffled mask. This is fucked. That is fucked. This could be ok.

And so the slow unpacking process began. Disappointment at seeing what could not be salvaged. Relief at what had survived, even covered in grime.

Mostly I got a frustrated What? in response because I was out of breath and talking from a blackened cave and Riley was getting things done outside.

I made it back outside, leopard crawling through the gnarly gap in the garage door, and removed my mask to catch my breath. But the fresh air wasn't fresh. It was the first time (without a mask) I smelled the burned and sooty air. Siff.

We formed two piles on either side of our unit – "Trash" – with a cleared path in front for the "To Keep" items.

It felt like more was being trashed than salvaged.

As we neared the back of the unit we realised the danger raised by the fire department. A vertical crack ran up the far right corner wall, daylight shining through and the haunting whistle of the wind rustling the ceiling foil insulation. Attempting to heft the scorched three-seater couch, stacked upright on a desk, didn't go well as it teetered backward, reverberating off the back wall. Nothing collapsed. 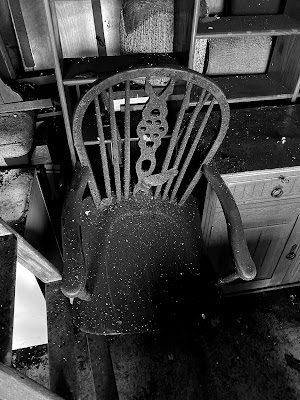 Family furniture from my mother, unusable. 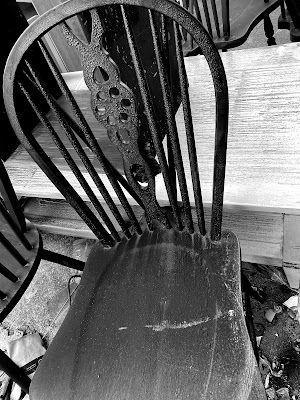 But there was some light in that ashy darkness. From halfway was the majority of our sturdy packed and taped boxes. Most were intact with the really precious things. The loose Fletcher (Mom) family photos from the 1930s onwards which I hadn't gotten around to scanning yet (the Embleton photos had been scanned weeks leading up to us moving and given back to my father). My and Riley's loose shoeboxes of photos – pre-digital – of our kids from babies up until around 2004. Not scanned.

Some things were beyond explanation. Like a fully inflated yoga ball.

A few units down was an empty unit, without a door, which we were allowed to pack our remains into – temporarily – while we organise it all to be moved to the Springfield depot in Durban the following week. A smaller unit.

The two days was hard work. Just the two of us.

We just wanted it to be done. We had done all of this at the end of June and now we were revisiting it. And then revisiting it again to move it to Durban! 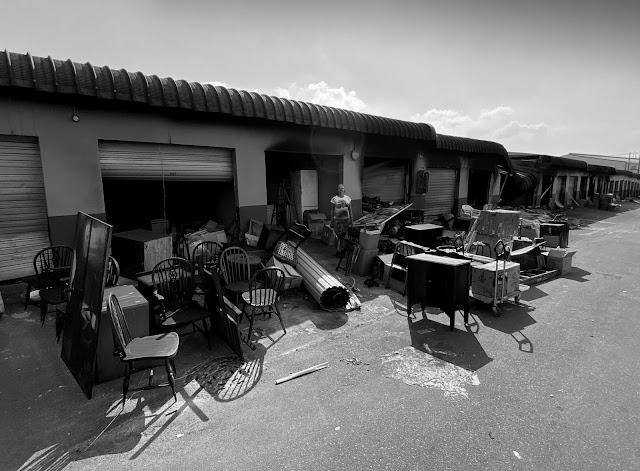 On Monday 9 August we went back to the storage facility for family to take some items for us. I was feeling depressed watching all the stuff that was going to waste. Dining chairs etc that could be refurbished – not by us! – by ANYONE and used, rather than tossed on a dump as firewood.