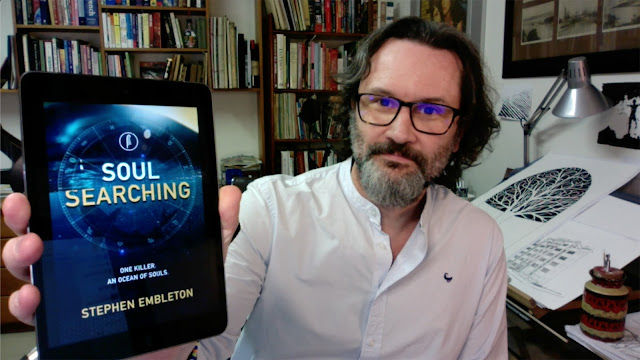 On Thursday evening I read a passage from my science fiction thriller, Soul Searching, followed by some insights and background into the segment chosen. Available in ebook on all major online book stores – paperback coming September.
WATCH HERE:

Below is the excerpt (from Chapter 4) – featuring the two main themes of Beliefs and Parents:

I was twelve, just about to break the spell of my youth and dive head on into teenager life. So that would have been 1985. My friend and I have just walked the five kilometres to his house after school, joking around, pushing each other into bushes. Kids. As we’re coming closer to his place we notice smoke in the air above his property. We give each other a look and pick up our pace. He’s got high walls surrounding his property but because of the incline of the road we can just make out his brother and mother busying themselves around the source of the smoke. He starts shouting to them as he’s opening the tall iron gate on the driveway. His mother turns to him and says something, but I’m standing stock still at the gate. I know something isn’t right, but not in the emergency sense. He’s getting pushed aside by his brother (older and bigger than him). His mother waves me away saying something about ‘New Age’ occultist. I got the hell outta there. It’s all a bit of a blur for me, but he told me the details later on when he knocked on my front door a few hours after. I opened the door to a pale hunched person, my best friend.

Some people say that everyone is given an experience that robs them of their innocence. His was ripped from his gut, through his heart and out of his throat. His experience was my awakening. I wouldn’t say that I lost my innocence that day. But the world became bigger than it had ever been. When I assumed I had it all covered, all figured out, it became this massive ball of energy and unexplained mysteries that what we were taught in school didn’t even come close to preparing you for. For him, in his words, he’d “seen what those he trusted were capable of doing.” But to me, I saw the nature of fear. How people react when they are scared. When they think they are protecting their family. That was the vastness I saw. Nothing was simple anymore. Everything, everyone you met, had many things that created who they were in a given moment.

We both sat on the edge of my bed as he told me what had happened that day. His mother had been at a church prayer meeting that afternoon. You know, tea, gossip, and fear- induced enthusiasm. The topic of music and magic being the path of the devil was tabled. In those days we had LPs, and one of the favourite techniques was to backtrack a song to find hidden messages aimed at the innocent minds of the youth.

“Damn warped to even think of that in the first place.”

Of all the damn albums they had to choose that day they chose Dire Straits’ Brothers in Arms. His Gran had bought it for him a few weeks before, and it was fresh in his mother’s mind. A song about getting your money for nothing and women for free was totally unacceptable. Then they laid into Bruce Springsteen’s Born in the USA album. Back tracked one or two of the songs. I don’t care if you take Beethoven’s 9th or Freezer Burn’s Heartache Headache, anything backtracked sounds perverted. Now I happened to have that Springsteen album at home and damned if I could hear any messages from the Lord of Darkness. To top it all off, his mother had allowed him to buy a ‘Learn to Be a Top Magician’ kit around his birthday a few months before. He’d been showing me his sleight of hand card tricks, tricks even I thought were magic. His mother had been waving the Dire Straits cover at me shouting, “Your parents should be ashamed, bringing up an occultist New Age Satanist”, and threw it into the fire. His brother had, moments before, scattered his magician box contents into the flames. The black smoke from the red plastic ball and plastic wand, had choked him as he’d tried to reach in to save his trick deck of cards.

A few weeks later we found some of the charred cards that had floated up in the heat and smoke a few kilometres from his house in the open grass where we had often gone riding on our BMXes. Anything that drives a kid to start smoking at thirteen should be deemed a ‘bad influence’. And if anyone was looking for the devil in the shadows that day, he was well and truly out in the open and dancing around the fire of a child’s hopes and dreams and innocence. And if ever the devil has a face, it’s a parent turning on their child, killing them to ‘save’ them. Destroyer of trust. Sleight of hand takes something without you noticing. This was blatant.

It wasn’t a father or mother that day. It wasn’t a brother. It wasn’t the devil in the flames. It wasn’t a family tragedy or the death of someone close. It was my friend sitting on the edge of my bed crying into his blackened hands, his belief in rock stars and magic. The worst thing a parent ever did was telling their child that the devil existed.