The Path My Mother Paved For Herself (A Eulogy):

Pat Embleton was first and foremost my mother – that is how I saw her early on – but as I grew older, I came to see who she was in the world – and over the past week, who she was to all of you. And it is this dichotomy, for me, the person of contrasts that I got to experience over the past 44 years.

She was firm, resolute, and sturdy like cobblestone, while at the same time, soft, and malleable like the sand used to take hold of the stones and keep her path firm. Contrasts. Opposites. Paving her way.

She was born, Patricia Anne Fletcher, and although born in Newcastle Upon Tyne, in England she was a South African woman.

She was an only child, who embraced the world.

Her working class parents were a contrast in themselves: her gentle natured father who survived Dunkirk, and her mother, a strong-willed and accomplished woman in her own right.

Her sons, Michael and I, are a contrast, each with differing characteristics she admired and adored. She told us so.

My mother was never a placard carrying, bra-burning feminist. But by her being herself she raised two boys to see who women really are in the world. She didn’t need a man, or permission from a man, to follow her dreams.  But she made sure we appreciated our father and who he was in our life no matter their history. By her example, she raised two sons to see women as strong, capable and impactful human beings. Her daughters-in-law reflect that. And so do her strong-willed granddaughter and her tender loving grandson – her legacy continues.

In my early teens, the contrast of how I saw my mother was evident to me when walking through the malls with her. It was like being with a celebrity and not my mother: people would stop her to say “Hi”. In the fraction of a second she would recognise them – most being young adults who she had taught as 5 year olds. She was still able to greet them by name and ask about their family and even tell me afterwards when they were a student with her.

Whether it was me at 2 cracking my skull and contracting meningitis; or Michael pulling his front breaks on his chopper and face planting the tar – roasties from forehead to chin – never mind the police force and a bomb blast or two in Iraq – she took it all in her stride, prayed for our protection, but never quashed our dreams or risk-taking.

Here is an example of her firmness and tenderness:

Around Primary school age, I left my Benjamin Pine tracksuit top behind after a weekend at my father’s. Firmly, she told me I had to ride my BMX, just as the evening chill was setting in, from Pinetown to Westville to get it. Reluctantly I set off on my own Amashova. I was sluggishly climbing the monster hill that some of you may know is Blenheim Road – checking over my shoulder every few pedals. Finally, her tender side emerged and she sent Michael to call me back.

In the early 80s, I remember clearly the Sundays, when the shops were closed and the parking lots empty, as Michael and I rollerskated around the newly built Westville Mall. And while us two boys ripped around carefree, she was sitting alone in her car studying to become the teacher she wanted to be. She put in the work. She put in the time to follow her dreams.

Mom was tough and self reliant, but she had her moments of vulnerability. Only recently she told me, with a chuckle, about being in the Durban UNISA building in the mid 1980s for training only a couple of floors below where a bomb exploded. She’d laughed at how you never know how you will react under that kind of pressure and how she had swooned into the arms of the big Afrikaans lady taking the lecture.

Through her own spiritual path she showed my brother and I a truly deeper meaning to life. My mother and I may have diverged on our spiritual beliefs but it never stopped us from having deep discussions about God and where we are in the grand scheme of things.

She loved her grandkids and loved the young adults that they are today – following their dreams and passions.

Over the years, Pat’s path was paved with the stones representing the encounters she had with each of us. Each of us played a part in fulfilling a part of her journey, whether it be her being there for us or us being there for her. Today we reflect not only on the impact she had on our lives but the parts we played in hers. Each and every one of us here today represents a stone placed in her journey.

One of the items she had asked me to bring to the hospital was a file with pages of rows and rows, columns and columns of people’s names. In her final week, and the moments when you all were thinking and praying for her, she was doing what she did, praying for others in need.

Last week, our mother left medical staff speechless at her matter-of-fact approach to the impending suffering to come and not wanting treatments to impair her final days. We held her as she was hit by one devastating result after another, and still she remained determined to see it through, as she had witnessed many of her patients experience the same. Even recalling some of her own advice she had given them.

She took each bit of news with a brave face, demanding frankness. While sitting with and allowing the emotions that followed. If I could ever love my mother more it was in the last week of her life as she  displayed who she really was – not going into a rage or anger at her situation or blaming or denial - but handling it with grace, honesty and humility. She gave herself the opportunity to reflect and acknowledge who she was while receiving the same from all of you with messages of support that she so appreciated.

Not many have the opportunity to say goodbye as we did with our mother. Not many mothers have the opportunity to have their family around them as they leave this world. She worked her arse off and she earned an end that few are privileged to have. Even with the disease that took her life so rapidly, God provided her with everything she wanted when it came to it. No pain. Heartfelt conversations. And her two boys holding either hand as she left for her next journey.

I was able to tell her how proud I was of her – not for her accomplishments that you all know, not for helping others, not for struggling to raise two boys as a single mother – but for helping herself, for following her dreams, bettering her life by studying to get to those dreams, and not relying on anyone, or any man, to get there. And in the end, being in the position she was in a hospital bed and not having to worry about comfort, costs, expertise – it was provided by the road she had paved herself.

My mother’s path led to her final moments, so perfectly orchestrated.

She was afraid, but she knew where she was going, and we were there by her side holding her.

The ashes of Leonard and Edith Fletcher’s daughter will be placed alongside theirs in the wall of this Church.

From Michael and I, I want to give some quick thanks to our family over the past two weeks:

We would like to thank Riley & Cecilia, for their support as we held our mother, Pat’s two grandchildren and their words to her while she was in hospital, our Father and Morena for their love and guidance, and our brothers from another/that mother, Marc and Warren, ready to do whatever to help us.

Because of how quickly everything went, to those of you fortunate enough to visit our mother in hospital, she was thrilled to have had you come by and share your love.

Finally: Some of my final words to her were: “You did good, Ma.”

I had the chance to read this poem of mine on the morning of her passing, written for her for Mother’s Day in 2002.

2021 WorldCon-DisConIII: PANEL TRANSCRIPT – Being African is Tougher Than You Think 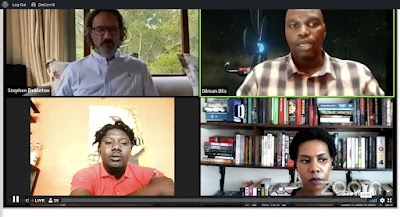 Being African is Tougher Than You Think Friday 17th December Travel costs, visas, and payment methods, conversation rates not to mention failing electricity, high data costs and PayPal not always working for you.  Distinguished writers from the continent talk about the impact of practical problems—and if it’s any better when you move to the West. Oghenechovwe Donald Ekpeki, Dilman Dila, Tlotlo Tsamaase, Stephen Embleton TRANSCRIPT: OGHENECHOVWE: WELCOME TO THE "BEING AFRICAN IS TOUGHER THAN YOU THINK" PANEL. YOU CAN SWITCH ON YOUR SUBTITLES FOR THE PANELISTS. I WELCOME THE AUDIENCE. WE ARE GOING TO BE TALKING ABOUT THE CHALLENGES THAT AFRICANS FACE. THE PANELISTS ARE HERE AND THERE IS NO NEED FOR ME TO EXPLAIN OR TALK FOR EVERYBODY. I’M GOING TO BE INTRODUCING THE PANEL. WE HAVE STEPHEN EMBLETON AND DILMAN DILA. THEY ARE AFRICAN WRITERS IN THEIR OWN RIGHT. I WILL LET THEM INTRODUCE THEMSELVES. TLOTLO: I’M AN AUTHOR THAT HAS WRITTEN AFRICAN ARTICLES, POETRY, AND SHORT STORIES
Read more