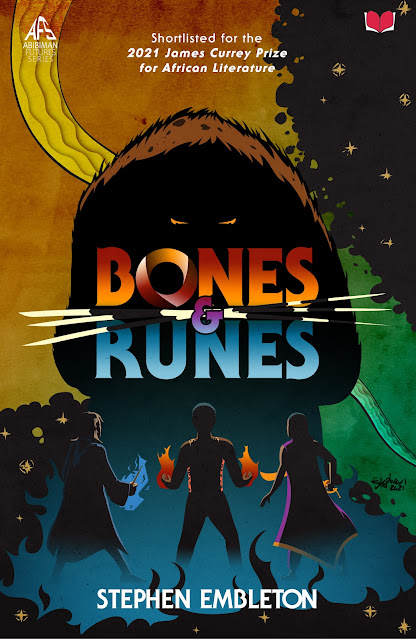 This is something I'm really proud of. The writing of it was truly a fantastical journey and came to be with the support of my family and the real experts in the fields of southern African cosmologies and linguistics. Published in paperback by Abibiman Publishing and their African Futures Series, and brought into the world by the determination and passion of Onyeka Nwelue. This is the manuscript which gave me the opportunity to be the James Currey Society Fellow at the University of Oxford in 2022.

This is Book 1: the adventure will continue...

"Highly original and compelling. Embleton's strange world is immersive and intriguing. This is a novel of adventure and ideas.”
– T.L. Huchu, author of 'The Library of the Dead’
“Embleton’s portrayal overflows with imagination, filling it to the brim with all manner of beings and deities from Zulu tradition. Richly imagined and powerfully authentic.”
– Damien Lawardorn, AUREALIS #148, March 2022

Three friends have their loyalty, beliefs and ancestral magic pushed to the limit.
Mlilo, a young isangoma, is forced to call on his friend Dan, a Druid apprentice, to help him retrieve his sacred amathambo (bones) from the clutches of evil. Taking us on an unprecedented journey through the magical realms of his ancestry and traditional beliefs, Mlilo's emerging skills are tested in life or death encounters with beings from the realm of Abaphansi. Amira, a close friend of Dan’s, has her own independent path to forge but will soon find that her personal quests are inextricably linked to the two men.
The three young adults, finding their way in the world, still have much to learn about themselves, their conflicting approaches, and their true callings. They must work together, combine their skills and find the talismans that make up Mlilo’s bag of bones, the key ingredient to an isangoma’s abilities and powers in this and the other worlds around us. While the gods, demigods, deities and shapeshifters, all with their own agendas, make navigating Abaphansi a deathly challenge.
The solitary isangoma, self-reliant to the extreme, will learn the importance of friendships, alliances and the meaning of living life in the real.

"CLARITY AND DUALITY IN THE FANTASTICAL REALM – A DIALOGUE WITH STEPHEN EMBLETON" – Davina Philomena Kawuma. Africa In Dialogue.